After a month of cancellations due to the freezing of Newport harbor, Old Man Winter showed signs of cracking. The Race Committee, made up of Dan and Karen Neri, Thomas Lemaire, and Sandy Takacs had to chip a foot of ice out of the Whaler, and remove the ice that coated the propeller.

Competitors arrived with snow shovels, and a variety of ice melting concoctions including windshield wiper fluid and anti-freeze. Fleet captain Jack McVicker brought his vintage Craftsman snow thrower to blaze a path to the beach.

Despite the deep freeze, clearing the snow and ice came easily to fleet members, as they’ve had a lot of practice this past month. The question was, after a month of cancellations, could any of the 20 Laser sailors actually remember how to sail?

Peter Shope sure could. Coming off the Masters Mid Winters in Florida where Shope won two of the three regattas, he had no trouble winning the day with a 1, 5, 3, 2, 4, 3, 1. 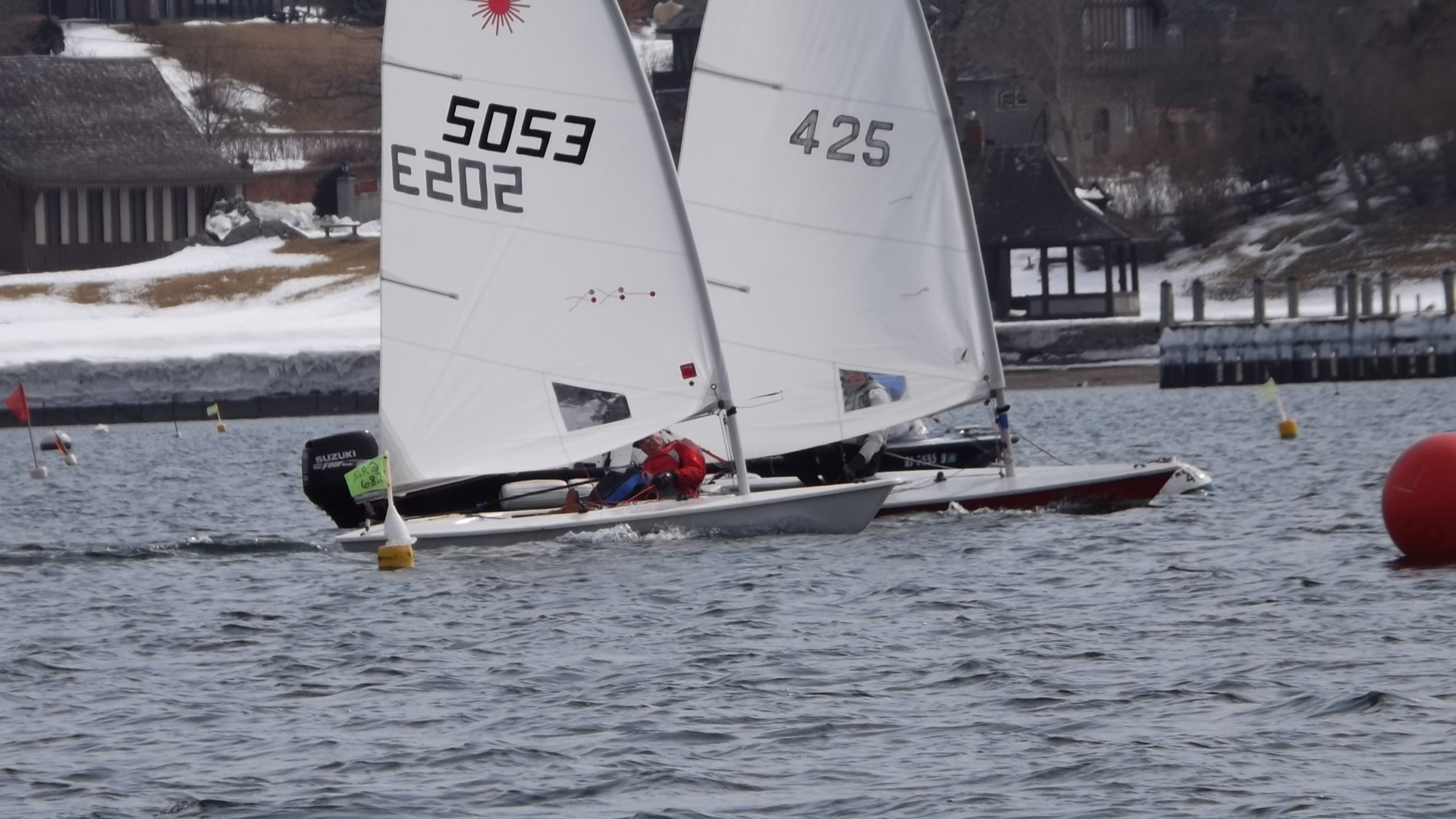 “I tried to start in a good lane and sail in clear air for awhile,” said Shope. Downwind, Shope believed the key to the day was to make a decision which way to go, and stick with it. Crossing the course downwind and choosing the left side after committing to the right was a big mistake.

For Shope, who had a bit of white paint in his hair from painting baseboards, the memory of the trip to the Florida Mid Winters brought a smile back to his face. He said, “Without a doubt, it is the most enjoyable sailing of the year. It feels like a reunion, seeing all of your old friends again.” 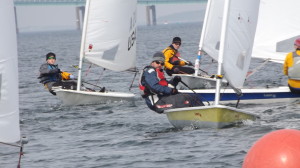 Sailing David Ford’s handsome yellow Laser, Stuart Streuli won the sixth race of the day.  Streuli said, “It’s been awhile. I didn’t win any races last year and I don’t think I won any the year before. It sure feels good to win a race in this fleet. I’ll carry that feeling around for awhile.”

Christine Neville who is campaigning to represent the United States in the Olympics Games in Laser radials was back from some training in Florida. Her objective on the trip was to fine-tune her boat speed and starting technique. Neville said, “the weather was beautiful but it is good to be back.” Her dog Annie, who is tall and thin and despises the cold, also made the trip to the Sunshine State.

Dino Garbero has made the decision to buy a Kokotat dry suit. The wait time for a new suit is six weeks, so the company sent him a loaner to use until his suit is ready. Garbero noted that the company would change the size of the torso of the suit or the booties for a custom fit. Mark Bear recently sent his Kokotat suit back for refurbishment. He has an XL Kokotat, never used, for sale if anyone is interested.

Andy Pimental just shipped two Snipes he built to Japan. According to Andy, the boats have not arrived yet, as they are on a container ship en route. The President of Jibe Tech, Pimental is always up for a challenge. He has crafted rowing shells, custom blades and kayaks. His work is at jibetech.com

Laser enthusiast Thomas Lemaire has lost 30 pounds since he joined fleet 413. He estimates he has 15 more pounds to go before he reaches his goal. The owner of Aquidneck Machine and Marine Company, Lemaire just finished approximately 300 pounds of custom bronze mast step parts for Santana, Humphrey Bogart’s yacht. In other news, Lemaire is taking delivery of a new CNC (computer numerically controlled) Mill, a 15-horsepower Hurco that will enable him to make 3D parts. Pretty exciting.

In other news around the waterfront, Newport rigger Mark Van Note who is often at the IYAC after sailing is offering handcrafted dog leashes. Each custom creation is built to the needs of the dog owner. You choose the line, the hardware, the length, and the shock cord core. The splices, whips, and transitions are all suitable for the most discerning yachtsman and the most distinguished dogs. Speaking from experience, Van Note’s leashes give you the ultimate control over the most rambunctious Labrador retriever. Each leash is $50. Mark’s email is mark.w.vannote@gmail.com

Joe Berkeley is a freelance writer who won a race on Sunday. His work is at joeberkeley.com