One of the most important pieces of gear for racing a Laser at Sail Newport on Sunday was a snow shovel. Many of the 23 competitors donned New England Patriots hats and  dug their boats out of snow banks to cleared a path to the beach.

Those who shoveled, then rigged up were rewarded with a picture perfect day of racing, with blue skies, long low light, and a pleasant breeze with a snow covered Fort Adams as the backdrop. How good was the light? So good that Onne van der Wal, one of the greatest marine photographers of all time and a winner of the Whitbread race, showed up to shoot some video of fleet 413 members. Onne’s work is at vanderwal.com. 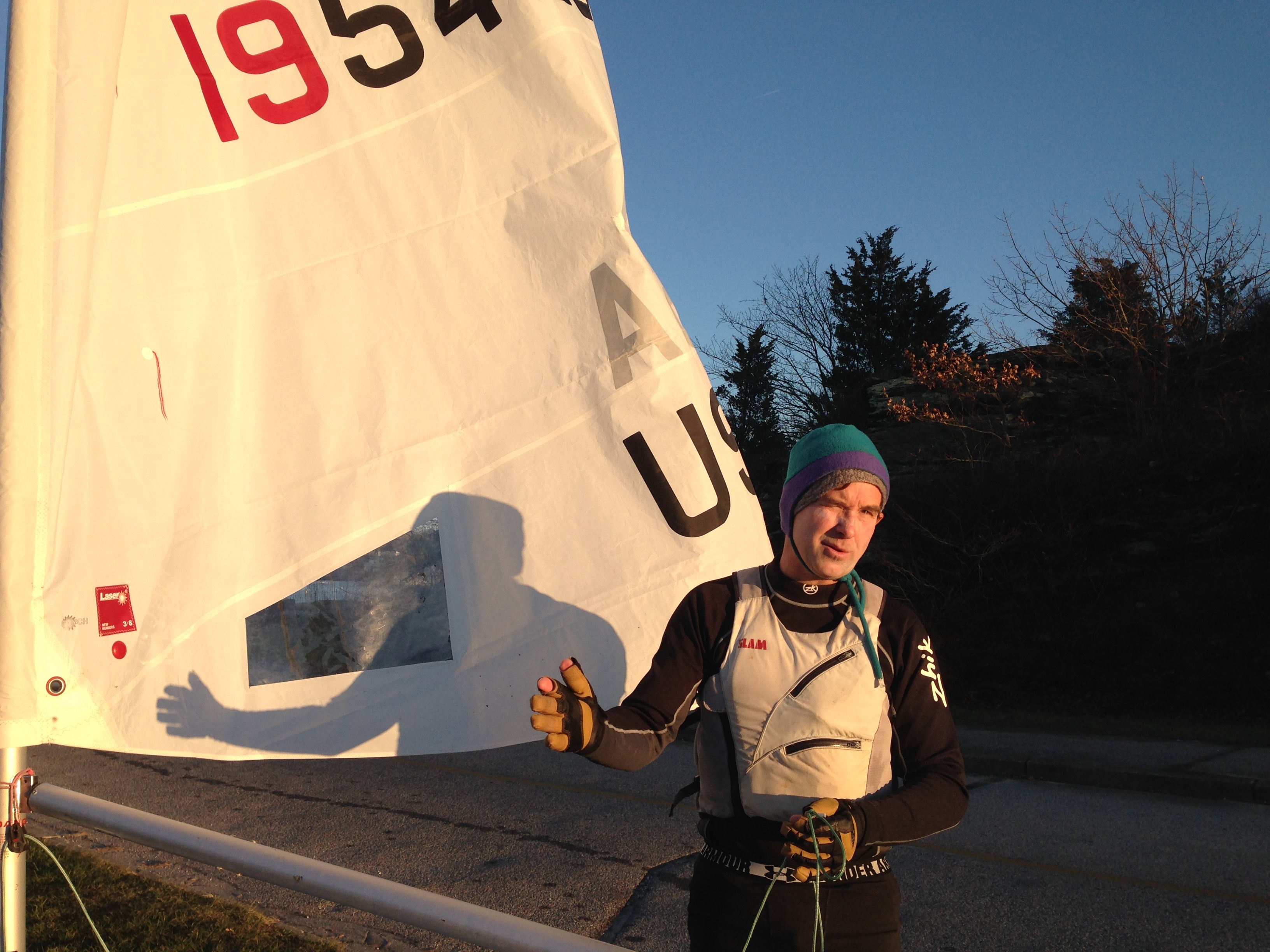 Peter Shope won the day with impressive finishes of 1, 1, 5, 2, 1, 1. Shope is in top form as he heads down to the Laser Mid Winters in Florida and Fleet 413 wishes the reigning US Masters National Champion and 2014 Master Mid Winter Champion well. Steve Kirkpatrick was second overall, Ed Adams was third, Andy Pimental was fourth, and Nick Ewenson was fifth.

Last weekend, Steve Kirkpatrick broke his mast in half in the sporty breeze. This created some good discussion in the boat paddock while rigging up. Ed Adams, a two-time Rolex Yachtsman of the Year, Laser World Champion and Star World Champion noted that he frequently inspects his spars for spider cracks and signs of corrosion in high load areas, such as where the boom vang fitting and goose neck fitting are attached to the mast and the center block of the boom.

As soon as Adams notes corrosion or spider cracks, he drills out the old rivets, end for ends the spar, and remounts the hardware with new rivets. Per class rules, the old holes are filled with rivets to maintain the bend characteristics of the spar. According to Adams this practice doubles the life of his spars from approximately five years to ten years. The practice has no effect upon performance, and Adams has competed successfully at the Laser Worlds with spars that he has end for ended.

Adams recently returned from an iceboat regatta, the DN Iceboating Worlds in Kingston, Canada where 101 sailors vied for bragging rights. The thrill of sailing at 60 miles per hour is what attracts Adams to sailing on hard water. He said, “It’s terrifying..I like being terrified!” DN sailors compete from a prone position and Adams said, “the faster you go, the less control you have.” At the event, one competitor hit the ATV, which was the committee boat, at speed. He was not injured but his ice boat was damaged. There is a video of the event here with some nice drone footage: https://www.youtube.com/watch?v=PxsEOoCZ_2s

One of the pleasures of sailing in Fleet 413 is you can get expert advice on how to repair your boat or have a professional repair it for you. Peter Hopple brought his Laser to Chad Atkins, who builds ice boats, to have some dings repaired in preparation for the Laser Mid Winters in Florida next week. If you need work done on your boat, check Chad’s availability at catkins4487@gmail.com.

Andy Pimental, the President of jibetech.com also does beautiful repair work on Lasers when he is not building Snipes or foils for numerous one-design classes. You can reach Andy at apimental@aol.com. If he’s available, you could get your boat repaired between weekends and not miss a single race.

The brand new Fleet 413 trailer is getting ready to head down to Florida for the mid winters. The trailer was engineered by Dynamic Dollies at dynamicdollies.com. Peter Seidenberg, the fleet 413 member and nine-time Laser World Champion who invented Seitech dollies is now a partner at Dynamic Dollies. Speaking from experience, nothing spruces up the performance of a 12-year-old Seitech dolly like a new set of Dynamic Dolly wheels.

Scott Pakenham-Beaker is driving four Lasers down to Florida and has room on the shiny new trailer for a fifth. If you’re interested in getting away from the snow blower for a week, join the likes of Mark Bear, Dan Neri (2014 Grand Master Mid Winter Champion), Peter Hopple and Peter Shope (2014 Master Mid Winter Champion) for some warm weather, cold beer, and competitive sailing. Send an email to Beaker27@aol.com. Scott delivers your boat valet style to each event. All you have to do is hop on a plane and show up to sail.

Attention Tiger Moms. As a way of boosting participation among youth sailors, Fleet 413 is pleased to announce the College Letters of Recommendation Outreach campaign. Any youth sailor who competes with fleet 413 and sails with integrity will be eligible for a college letter of recommendation from a fleet member. While fleet 413 members may appear to be a motley bunch of retreads and reprobates when they’re out on the water, on paper, they are an impressive crew.

A letter of recommendation from a fleet member who is a college professor, a Wharton graduate, an editor of a prestigious publication, or a World Champion does not guarantee entry to university, but it sure can’t hurt. Youth sailors are always welcome in Fleet 413 and there is no entry fee for high school or college students. Yes, you sail for free.

Fleet Co-Captain Jack McVicker is pleased to announce that Fleet 413 now has not one, not two, but three fleet boats.  Two of the new fleet boats are being outfitted with modern gear by the good folks at Laser Performance, which is where fleet 413 member Nick Ewenson works as an Institutional Sales Rep. Fleet boats can be reserved on the website, https://newportlaserfleet.org/fleet-boat-registration/

Many great sailors in the Laser class, like the nine-time World Champion Peter Seidenberg, have noted that tiny changes can make a big difference in performance. Whether it’s easing the outhaul half an inch, hiking just a little bit harder, or easing the main to exactly 90 degrees downwind with vang loosened to 64 centimeters between the two pins, small adjustments make a difference.

The same could be true of morale. To sail a Laser in the midst of winter can be pleasurable or unbearable. The right hat, the right pair of gloves, even the right booties can have a huge effect upon morale.

Today’s gear review features some optional equipment which is more land based, but can have a good effect upon morale and good morale can lead to good performance.

The Thermos Stainless King line is available as a beverage bottle, a food jar, or a travel mug. The containers are constructed from unbreakable stainless steel, with leak proof leads, and a fancy blue/black finish that appears to be powder coat or a high quality paint.

The bottle holds 40 ounces of your favorite beverage. Mine is tea, so I brew up a pot on Sunday morning, pour it into the Thermos bottle, add some milk, then put it in my food kit for the day, a well-used Igloo Legend 24.

The Thermos King bottle has a no-spill top which you unscrew a turn or so, then you can pour your beverage into the cup, which screws to the top of the Thermos which creates the no-leak seal. It’s great to have a hot cup of tea before rigging up the Laser. I have sailed in Newport on Sunday, and stayed overnight for a business meeting. Monday morning, the tea in the Thermos was still hot.

Now that the boat is rigged, it’s time to eat lunch before sailing. Sure, a cold sandwich is fine. But on those miserable winter days, it is great to push the front seat of the 4 runner all the way forward, relax in the back seat, and crack open the Thermos Food jar.

Built of the same materials with the same finish, the Thermos Food Jar holds 16 ounces of liquid. The big break through on the Food Jar is the cap comes with a built-in foldable stainless steel spoon. The mouth of the Thermos is wide enough so you can dig in without having to pour the soup into the Thermos cap.

I’ve found that one can of Progresso soup fits well into the Thermos Food Jar. If it’s going to be really cold and windy, I add some additional protein to the soup, like a bit of leftover roast chicken.

The hot soup makes the cold sandwich that much more delicious. As the steam rises off the soup and your car windows start to fog up, you feel warm all over. Now you are warm on the outside, warm on the inside, and ready to change into your gear for the day.  Pack a couple of snacks into your lifejacket and you are ready for a spirited day.

The Thermos bottles retail for about $25 each. I purchased mine on amazon and got a Thermos brush for an additional $2 which really helps with the cleaning. The food jar lid has a rubber seal, which tends to smell a bit like the soup that used to be in the container.

The other major flaw with the Thermos King bottles is they can turn you into a bit of a bore. I am so excited about my foldable spoon and hot soup, my wife has wondered aloud if she should have married that tall, good-looking man with the cleft chin and the trust fund who rowed the six seat for the Varsity 8 back at university. According to her, he was totally hot. Really? But was he as hot as the soup in my Thermos King?

Joe Berkeley is a freelance writer who finished in 7th overall on Sunday. His work is at joeberkeley.com