With all due respect to trick plays in Foxborough, Will Donaldson won the day Sunday in Newport with the oldest trick in the book, consistency. His scores of 4, 4, 3, 3, 1, 2 demonstrated a mastery of variable conditions that were challenging as well as cold.

About his victory, Donaldson, the General Manager at Schaeffer Marine, said, “Even a blind squirrel gets a nut once in awhile.” Donaldson attributed his success to tacking on the shifts and never giving up. He also mentioned the new, warm gloves he received as an early Christmas present.

There was a lot of traffic at the pin end of the line, so Donaldson often started closer to the middle. Even if the pin is favored, he does not like to be stuck on one side of the racecourse waiting for others to tack. Being able to tack when he wanted to tack afforded Will the chance to catch about four boats on the last leg of each leg. 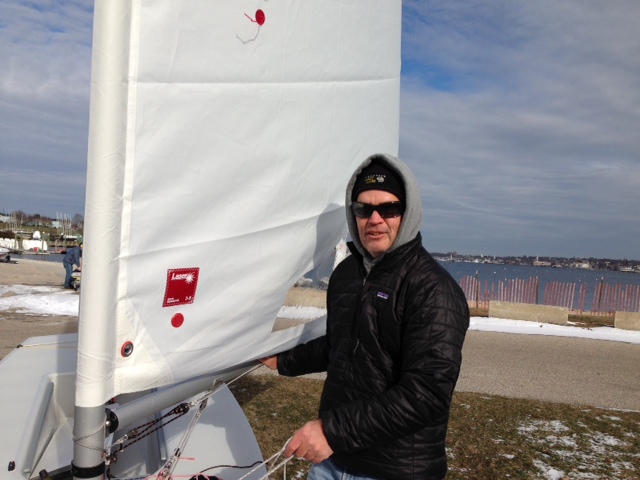 Dan Neri finished in second overall. He said, “I’m glad to see Will beat me by seven points.” Neri enjoyed the sailing today and mentioned he had two pairs of gloves onboard. After the first two races, he changed out the wet gloves for the fresh pair of dry gloves, which warmed his hands and rallied his morale.

Oakley Jones sailed one race, broke his gooseneck, and ended his day. His neoprene gloves were not up to the task of keeping his hands warm, so he was not too distressed about the breakdown. 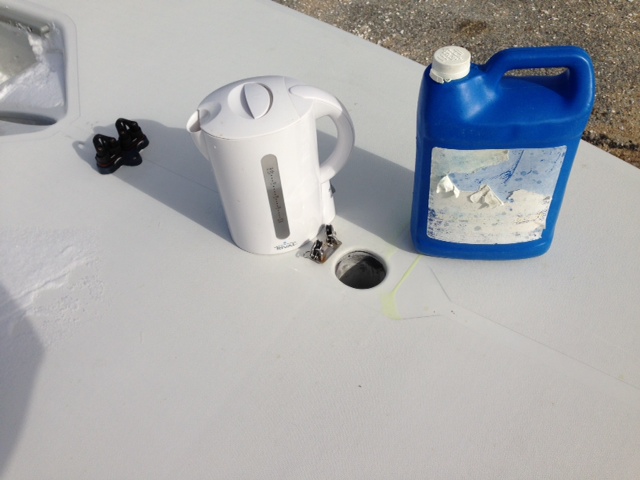 Today was the first true day of frostbiting, where many competitors arrived at Sail Newport to find a lump of ice inside their mast steps. Jack McVicker looked like he was making tea for two, but his teapot was filled with hot water to melt the ice. Mark Bear eagerly borrowed the rest of Jack’s hot water and cleared his mast step. Fleet Captain Peter Shope utilized a more organic method of melting the ice which did not involve the use of electricity.

Ralph Kinder won a race. A partner and attorney at the law firm of Gilstein, Kinder & Levin, LLP, Kinder said, “I got lucky, hit a couple of shifts on the right while Shope and Bear were battling on the left.” Kinder sails barehanded and believes that if you work hard in the boat you stay warm. Ralph’s brother Phil established Kinder Industries in 1994, and for 18 years, they have made boat covers that are so beautiful, sailors stop and stare. His latest creation is a mainsail cover for the new Rambler. Check them out at kinderindustries.com

Steve and John Kirkpatrick served as race committee today. Not only did they run six fabulous races, they also had some observations to offer sailors. According to Steve, the fastest downwind sailors in the fleet ease their booms to 90 degrees, or maybe 85 degrees then ease their vangs a lot. According to Steve, this encourages the leech of the sail to breath downwind. The slower sailors are easing their mainsheet past 90 degrees and over trimming their vangs which is slow.

Kirkpatrick’s other observation was that the committee boat should have a can of WD-40 on it to defreeze the automated starting sequence box. It didn’t work so Kirkpatrick had a headache from blowing whistles for the three-minute sequences.

Jenny Daudlin, a Fleet 413 member who is also the sailing sales representative for Helly Hansen North America has presented the Fleet Captains with some beautiful schwag. There are Helly Hansen tops, suits, hats, and more. The people who compete at a high level, sail often, pay their dues and do their RC work will win the prizes. Peter Shope and Jack  McVicker are accepting nominations from the field but will award the gear at their discretion.

Stuart Streuli was out on the water. The former Sailing World editor and current Director of Communications for the New York Yacht Club sold his Laser over the summer and was out in a yellow Laser he borrowed from a friend.

Former Fleet 413 sailor Platt Johnson checks in from afar. He is doing a lot of kite boarding lately and his Facebook feed features photos of him high above the waves. As a side business, Platt runs a vacation rental on Martha’s Vineyard that does high-end family reunions and the occasional wedding. Details are at captainmorsehouse.com

WindCheck magazine was kind enough to run a two-page feature on Fleet 413. Look for WindCheck on a newsstand near you. File is attached as a pdf.

Joe Berkeley is a freelance writer and a member of Fleet 413. He finished the day in third overall. His work is at joeberkeley.com